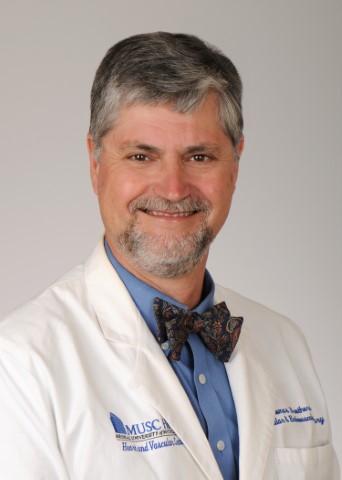 Dr. Thomas Brothers joined the Department of Surgery at the Medical University of South Carolina in 1991 directly after completing medical school, general surgery residency, and fellowship in vascular surgery at the University of Michigan. He has been continuously certified by the American Board of Surgery in surgery since 1990 with added qualifications in vascular surgery since 1992.

Since arriving at MUSC, Dr. Brothers has focused his practice on the management of circulation and peripheral vascular disease. Like many of his surgical colleagues in the Department of Surgery, Dr. Brothers has been recognized as one of America's Top Surgeons and Best Doctors since 2003. Although he welcomes patients with a broad spectrum of disorders of the circulatory system, he is especially interested in the treatment of arterial occlusive disease of the lower extremities, renal and mesenteric circulations, and carotid arteries. He also has extensive experience with thoracic outlet syndrome, as well as aneurysmal disease of the abdomen and lower extremities.

Early during his training, Dr. Brothers developed an interest in improving the treatment of atherosclerosis (peripheral arterial disease) throughout the body and especially the lower extremities, with emphasis on the body's response to vascular interventions.

Dr. Brothers has published over 90 articles in peer-reviewed scientific journals on these topics, most recently focusing on the patient-centered outcomes including function and quality of life following intervention for lower extremity arterial occlusive disease. To this end he has participated as the principal investigator or collaborator on numerous research grants over the last two decades. Dr. Brothers was promoted to Professor of Surgery in 2003 and Adjunct Professor of Bioengineering by Clemson University in 2004 in recognition of his scientific interests and accomplishments in the study of vascular graft healing. He enjoys membership in a number of vascular societies, including the Society for Vascular Surgery (distinguished fellow), the Southern Association for Vascular Surgery, and the Society of University Surgeons. Reflecting his long interest in education, he served as program director for the surgery residency program at MUSC from 2002 to 2012 and has been recognized as an outstanding educator by medical students and surgical residents alike.