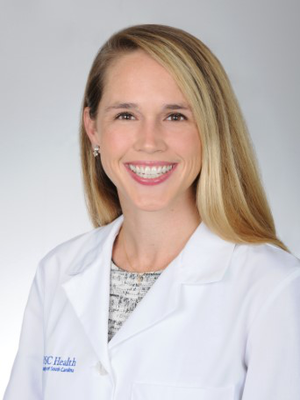 Dr. Rachael Cowherd joined MUSC Women's Care as an obstetrician and gynecologist in 2019. She was raised in Orlando, Florida, and earned her undergraduate degree in chemistry at Wake Forest University where she graduated summa cum laude with Phi Beta Kappa honors. She then attended the Gilling School of Global Public Health at the University of North Carolina at Chapel Hill where she received a Master of Public Health in Nutrition and was elected into the Delta Omega Honorary Society in Public Health. She served as a registered dietitian and clinical research assistant at the University of North Carolina Nutrition Obesity Research Center from 2010 to 2011. She then went on to earn her Medical Degree at the University of North Carolina at Chapel Hill and was awarded inductions into the Alpha Omega Alpha Honor Medical Society and Gold Humanism Honor Society. She completed her residency at the Northwestern University Feinberg School of Medicine in Chicago, Illinois. Dr. Cowherd is committed to practicing evidence-based medicine, building strong connections with her patients, and teaching medical students and residents. Her clinical interests include uterine fibroids, irregular menstrual bleeding, vulvar disorders, well women care, minimally invasive surgery, gynecological surgery, sexually transmitted infection screening, obstetrics, and vaginal birth after cesarean section (VBAC).