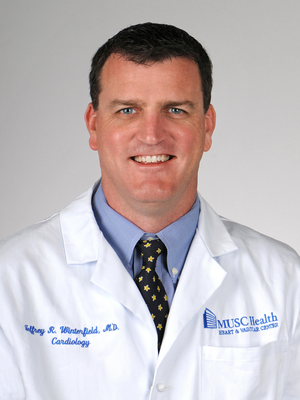 Dr. Jeffrey Winterfield is an associate professor of cardiac electrophysiology at the Medical University of South Carolina. He received his undergraduate degree from Amherst College in Massachusetts and his medical degree with honors from the University of Chicago Pritzker School of Medicine. He completed his internal medicine training at the University of Texas Southwestern Medical Center in Dallas. After completing his internal medicine residency, he was selected for a highly competitive fellowship in cardiovascular medicine at the Brigham and Women's Hospital, part of Harvard Medical School, in Boston. Dr. Winterfield's interest includes cardiac arrhythmias; he remained on service at the Brigham and Women's Hospital as a fellow in clinical cardiac electrophysiology where he trained with several leaders in the field. In 2011, he took his first faculty position in the prestigious heart rhythm program at Loyola University Medical Center in Chicago where he remained for five years. During that time in Chicago, he published multiple papers and abstracts, participated as a principal investigator in clinical trials regarding complex rhythm management, and served as faculty in national and international meetings. In 2016, he was recruited to MUSC for his expertise in catheter ablation of complex arrhythmias, particularly ventricular tachycardia (VT) and premature ventricular contractions (PVCs). He has special expertise in catheter ablation of arrhythmias on the outside of the heart (epicardial VT). Dr. Winterfield takes care of adult patients with cardiac rhythm disturbances including supraventricular tachycardia (SVT), Wolf-Parkinson-White (WPW), atrial fibrillation (AF), as well as premature ventricular contractions (PVCs) and ventricular tachycardia (VT). He has a particular interest in VT in patients with advanced heart disease including ischemic and non-ischemic cardiomyopathies.